All Life Needed to Get Started Was Good Old Physics 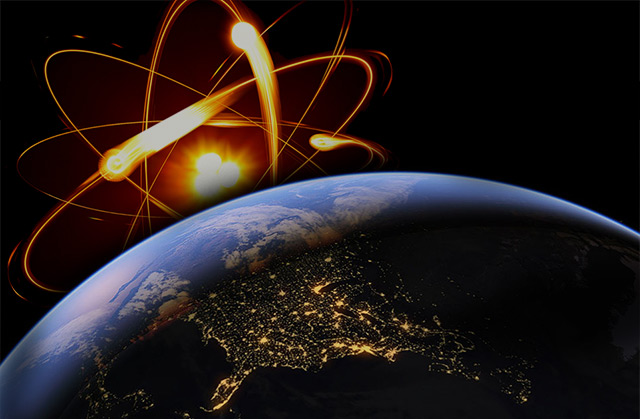 Two new papers published by Massachusetts Institute of Technology biophysicist Jeremy England provide support for his 2013 theory  that life arose simply as the result of thermodynamics.

He proposed that given the right conditions, atoms can spontaneously arrange themselves into structures that consume more energy and release it as heat. This leads to an increase in disorder, or entropy, in the universe. This reorganizing effect supports the growth of complex structures through a process that England calls “dissipation-driven adaptation.”

If this is true, it would mean that life — which consists of many types of complex structures — is not as random as you might think. England’s theory also suggests that the earliest life forms benefitted from a combination of physics and the right initial conditions.

England’s two new papers — published in the Proceedings of the National Academy of Sciences (PNAS) and the Physical Review Letters (PRL) — describe the results of computer simulations done using a simple, simulated system of chemicals or particles.

In the PNAS paper, each system consisted of 25 chemicals that were allowed to interact with each other. Energy added to the system — the way sun provides energy to life on Earth — “forced” some of these reactions to occur. For each run, England’s team varied the initial conditions, the reaction rates, and which reactions were boosted by energy coming from outside the system.

They then let these simulations run their course. Often, the system reached a steady state, or equilibrium — where reactions going one way were balanced by reactions in the opposite direction. This is similar to how a cup of coffee will eventually reach equilibrium with its surrounding environment, which is an example of the second law of thermodynamics — where energy tends to spread out and entropy increases.

In some of the simulations, though, the end result was a point far from equilibrium. In these cases, the systems cycled through the reactions, gathering as much energy as possible from the environment. In a sense, the atoms rearranged themselves so they could better absorb the energy from the environment and release it as heat. England suggested in another paper that this process might support self-replication, another feature of life.

All organisms do this kind of “extremal thermodynamic forcing,” as England and his colleague Jordan Horowitz call it in the PNAS paper. Bacteria take in energy from the environment and convert it to chemical energy, which is then used to maintain their “system.” Human cells do this, too, although on a much more massive scale.

In the PRL paper, England and his colleagues found that over time a system of particles can also become better at absorbing energy from the environment by forming and breaking bonds. Even when the researchers created environments where it was more difficult for interacting particles to absorb energy, the system still sometimes found the magic arrangement that allowed better energy absorption.

England’s work suggests that the kinds of steady-state systems that are so integral to life can arise spontaneously and relatively quickly. The big question, though, is whether this is all that is needed in order for life as we know it to exist. Not everyone thinks so.

First of all, the conditions that England used in his simulations are much more simple than what existed when life was first incubating in the Earth’s primordial soup. Other researchers would like England and his colleagues to test the simulations using conditions more similar to these early years of life.

But even if molecules in a primordial soup can spontaneously arrange themselves to extract energy from the environment, that doesn’t necessarily make them alive. Another trait that would be needed is the ability to take in and respond to information in the environment — something that all organisms, from the smallest virus to the largest mammal, do throughout their lifecycle. This includes being able to move around in the environment in response to stimuli.