A Taste of SAND16 - The Universe and the Luminous Mind 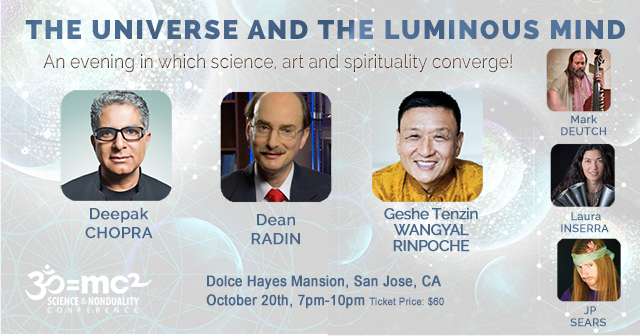 Join us for the opening night of SAND16

The Universe and the Luminous Mind

**This evening is part of the Science and Nonduality Conference**

This session will discuss the seven universes that human beings have devised to explain existence, leading to the conclusion that the cosmos has evolved to reflect human evolution. This is not a philosophical observation but a “must be so” when it comes to such baffling dilemmas as the origin of life and the appearance of consciousness. The seven universes reflect human perceptions about reality itself.

From Magic to Religion to Science: What’s Next? Dean Radin, Ph.D., Chief Scientist at the Institute of Noetic Sciences

Humanity’s first grasp of reality was based on a magical worldview. Over millennia, magic evolved into a multitude of esoteric and religious ideas. Within the last five centuries our worldview has settled upon science as the arbiter of truth. Each of these major transitions has offered more comprehensive explanations of the natural world, but each new paradigm also suppressed useful elements of previous worldviews.

Join Tibetan Bön meditation master Tenzin Wangyal Rinpoche as he invites you to engage in the practice of meditation and reflection, to look intimately within and discover the jewel that is hidden in your ordinary experiences.

In the SAND Box - JP Sears

Laura Inserra-Is a composer, multi-instrumentalist, and artistic director. A native of Sicily and an internationally acclaimed Hang player, her performances are infused with a unique blend of musical inspiration and melodic harmonies, which deeply resonate with audiences worldwide.

Mark Deutsch A professional musician since the age of twelve, he is a visionary artist with a background in non-linear mathematics, sacred systems and cosmology.  As a In 1999 Mark was awarded the US patent for his ground breaking new instrument the Bazantar – a five-string acoustic bass fitted with an additional twenty-nine sympathetic strings and four drone strings.